Member of the dog family, Canidae

Population: Coyotes are present in every county in Wisconsin, but today the majority of the estimated population of 17,000-20,000 is found in the northern half of the state.

Habits: In Wisconsin, coyote home ranges are generally 5-10 square miles in size. Coyotes are very sociable animals and frequently play with each other. Besides hunting in small packs, they will gather to feed on carrion (dead animals) or just to play.

Although coyotes are primarily nocturnal, it's not uncommon to observe them during the day. As a survival instinct, coyotes became nocturnal when Wisconsin settlers pursued them as game.

Diet: Primarily rabbits, small rodents and animal carcasses, but will also eat birds, fish, amphibians, reptiles, and a variety of fruits, vegetables, grains and other plants.

White-tailed deer carcasses are a principal food source for the coyote in Wisconsin. Coyotes do not commonly prey upon deer, although they are capable of taking fawns and weakened adults. 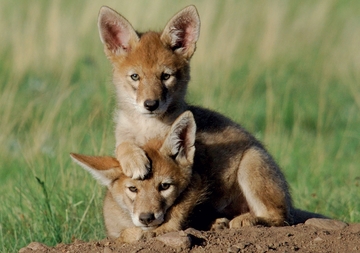 Mating: Mating usually occurs, in Wisconsin, between February and March, and although pairs may breed for many years in a row, coyotes do not mate for life. They are fully mature and able to reproduce at age one. A litter of 5-7 pups is born usually in April, after a gestation period of 60-63 days.